Getting closer to the EU Referendum where British people vote to remain or leave the EU you can see how nervous everyone gets: You see people of one or the other party handing out flyer, the newspapers are full of EU Referendum headlines (even in Germany) and social media get´s flooded with video clips, newspaper article, poll statistics etc. I wished the EU would be more appealing to the British than it currently is so that we wouldn´t be in this position of not knowing how the vote will go here. I am at a loss of words that a politician, a wife, a mum lost her life over this vote! This is unbelievably upsetting!

I want you to know how much I love and enjoy living in the UK. We chose London over any city in Germany, where we originally come from. The life here is so much more exciting than back home: I meet people from all over the world in my company, at my children´s school and everywhere we go in London. It is kind of travelling around the world without actually doing so. I am always impressed how welcoming and open British people are and how easy it is to get to know them even though we are not British.

We initially came to London when my husband got offered a job. We couldn’t think of any better city to live in Europe. It’s the best city for my husband’s job and we also have everything we wished for for our children: Great schools and Universities, plenty of activities for kids throughout the day, a good health- and an outstanding safety system. And it is lovely to see my kids growing up with children from various cultural backgrounds.

Last weekend we spend a day at the beach. It was a lovely day but there was something catching my attention on the way back: The huge „Brexit – Vote Leave“-advertising along the roads. On top of that I read a conversation in a local Facebook Mum’s group the same night. Let me repeat the conversation in my own words:

Lady 1: „Does anyone exactly know what will happen with EU citizens when Britain leaves the EU?“

Lady 3: „If you were here for over 5 years you can apply for permanent residency.“

I didn’t follow this conversation any further but I was really surprised by the fact that someone makes these statements in a group of local mums of which probably 50% are non-British immigrants or Expats – however you may call us. I am sure Lady 2 does not represent many views and felt emboldened sitting behind her keyboard. Anyhow it made me feel offended.

I am really not into politics and I do only have a vague idea what might happen if Britain leaves the EU. My husband and I are both working so I guess we would be allowed to stay. However my husband’s company might move to a city within the EU… But we don´t want to move anywhere right now!

Britain leaving the EU just doesn´t feel right for me. The increasing number of conflicts and terrorism around the world may make people think, they are better off if their country is independent and can decide what is best for their own people. But aren´t we stronger living and working together as a union?

Many well-known people, politicians, scientists and institutions believe that it is best for the UK, for the EU and for the whole world if Britain remains in the EU. I do trust these experts and want my children to grow up in a strong and safe Europe. I´d rather call them being European than German, which they hardly are as one has spent half and the other nearly all her life in London.

I cannot change anyone’s mind of what to vote on June 23rd. But I can reassure that there are thousands of EU citizens (and probably also thousands of British people living in Europe) nervously waiting for the result of the Referendum.

Fingers crossed more British people vote for Europe than against it! 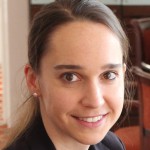